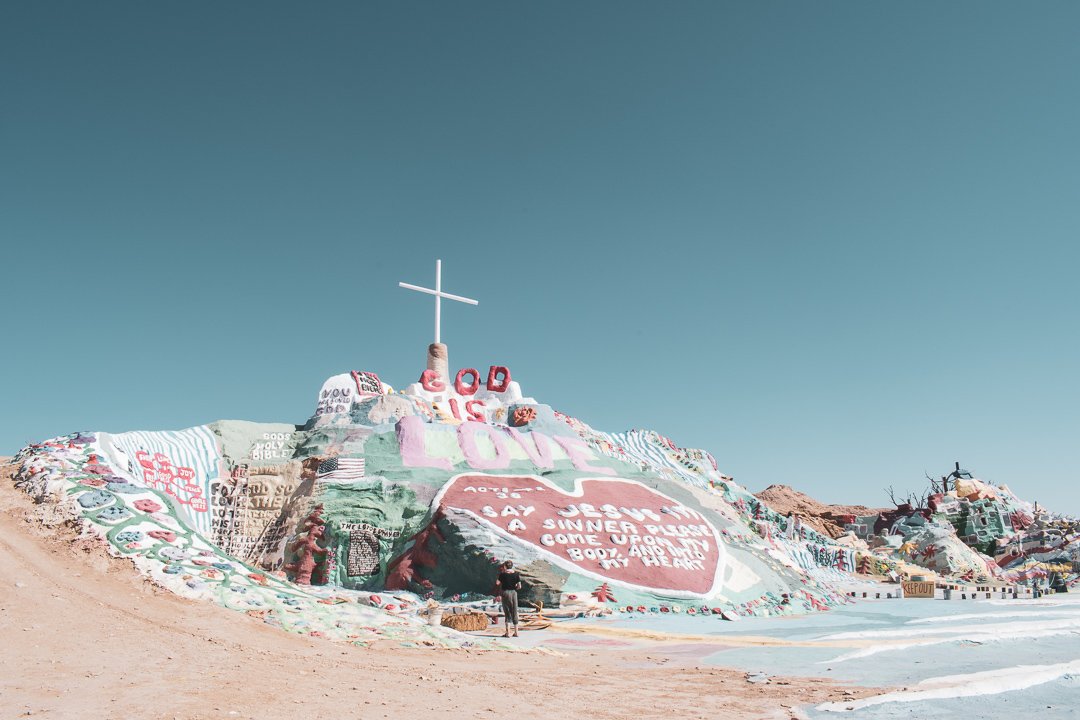 15 Photos From Inside Slab City. An Artistic, Dystopian Utopia.

Entering Slab City is like walking on an alien world.

About 200 miles southeast of the concrete jungle of Los Angeles, there exists a place where the dry air, dirt roads, a forgotten WWII training camp, and art collide into a strange nation of RVs and ramshackle huts. You've left California and entered The Slabs.

Many things have been written about Slab City; it's dangerous, lawless, and always on the verge of anarchy. While I cannot refute those opinions I hope these photographs and UNEXPECTED: Salton Sea provide an insight into a place that is often feared, ignored, and misunderstood.

Here are the basics: Slab City is an informal settlement in the Sonoran Desert in Imperial County, California. According to the people I interviewed, about 500 people live there during the summer until the population swells to 1,500 during the winter. To those diehard 500 summer dwellers, I don't know how you do it, a regular summer day can easily get over 120 degrees (48.8 Celsius) in the shade.

Whether they are there all year or just for "the season" all Slabbers seem to share one thing in common, they want to live differently. This outlook on life affects everything they do and don't do. For some, it's a rejection of capitalism but for others it's a simple desire to get away.

These photographs show how these choices have found voice through the art and sculpture in the unusual world of Slab City.

On your way to Slab City, you'll pass through the near ghost town of Niland and this abandoned bank from the 1930's. It's Greco-Roman architecture and stern facade feels starkly out of place and jogs your senses just entering The Slabs.

Slab City stands as the "Last Free Place" where conventions are left behind and anyone is welcome.

Salvation Mountain stands as the welcoming monument to Slab City. On it's brightly painted stone facade the interplay of words, Bible verses, and maxims form a manifesto for a people on the edge of society.

What begins with Salvation Mountain soon leads to an array of rebellious artistic moments. Nothing is labeled or credited and no one seems to care. It's there because it's meant to be there; not to grow the reputation of some emerging artist.

Who would create Stonehenge from dilapidated cars?

Who would create this bridge to nowhere? No one knows. Even after asking around, the meaning of the art and the place itself seems impermanent and open to interpretation. In some ways it makes sense; the last free place is also free of presubscribed definitions, each person must create their own.

Inside Slab City is East Jesus, a sculpture park unlike any other. Much of the sculpture consists of repurposed household items that have become provocative art.

East Jesus is by far the most organized destination inside Slab City but even this is within the context of the Slabs. Entrance is free, of course, but so is the onlooker to touch everything and come to their own conclusions.

A lookout tower inside East Jesus.

The Range is the heart of Slab City. Every Saturday is open mic night and the community comes together to listen to music and hear people speak.

Slab City is loosely divided into camps where people live and take care of the area. The Skatepark is one of these camps. They obviously love skating but also have a reputation for being handy and good repairemen.

The people who live at the Skatepark hope to eventually build some rails and a halfpipe. When I asked if there was a real plan to make this happen one man said, "This is Slabs, if somebody is going to do it they are just going to do it. No plans."

On the edge of Slab City there is the Colosseum. It is a 20 foot high abandoned tank with art drawn all the way around.

The Colosseum's presence is simultaneously calming and jaring. It juts out of the sand with no visible purpose or heritage. The only thing you can think about is figuring out a way to see what's inside.

I had a rush of adrenaline after climbing some jerry rigged stairs and peering over the edge. You wouldn't want to fall inside the Colosseum. I couldn't see a way out.

As you leave Slab City, this sign almost tempts you to turn around. You get the feeling that this reminder has convinced many people to stay inside The Slabs. 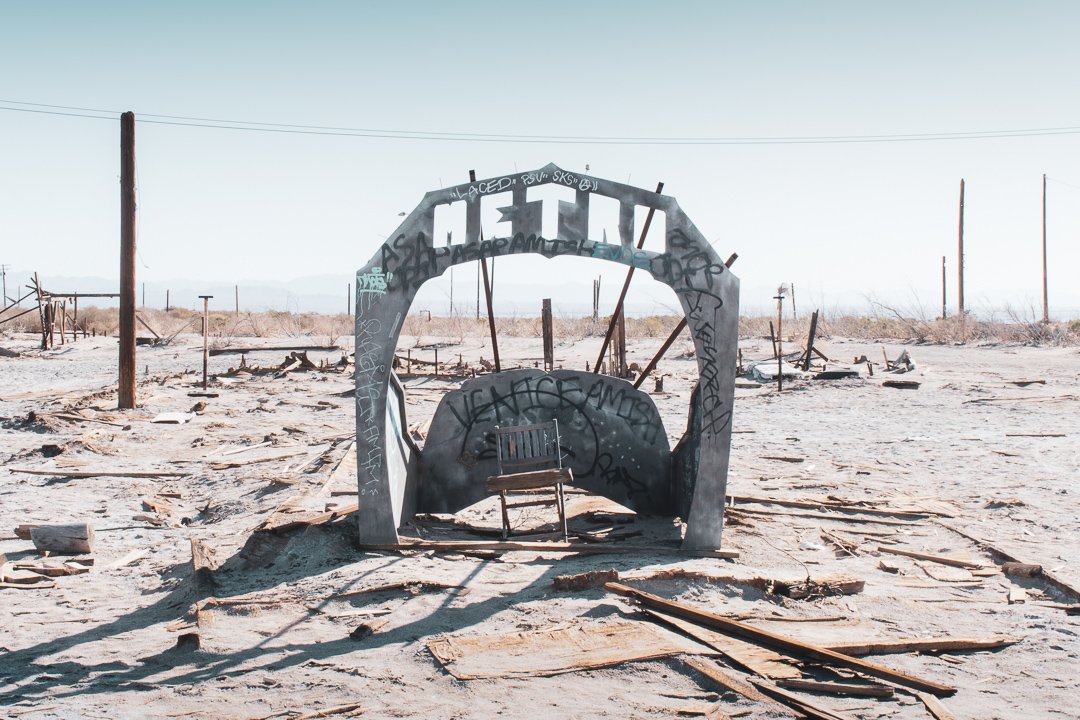 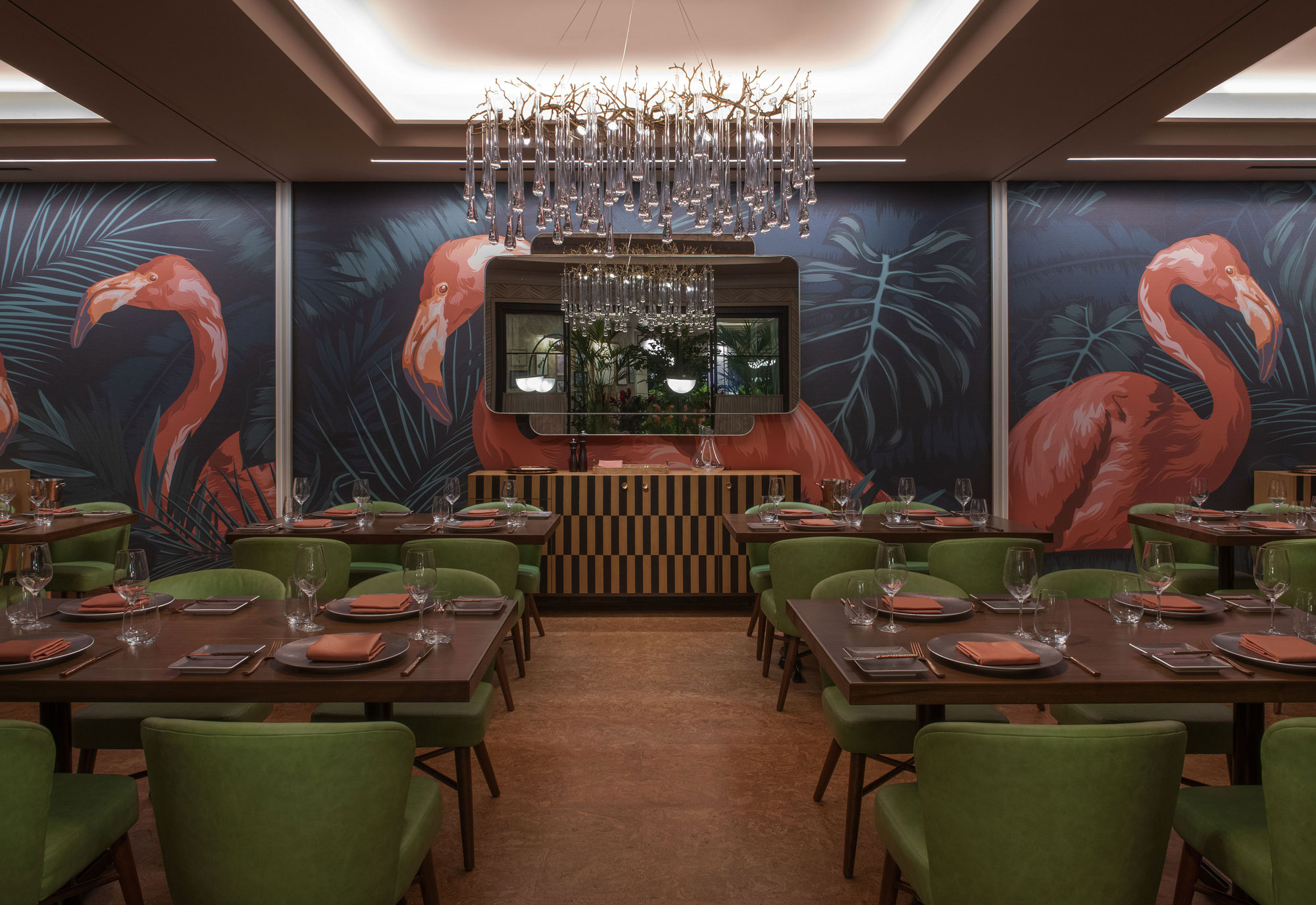 How to Select the Best Artwork For Your Restaurant